Results from the Plateau

The results of the consultation were integrated into the borough’s budget presentation on September 17th. The results show how Citizen Budget can be used as an effective tool for residents to express their budget priorities and openness to new revenue-generating activities, such as additional parking spaces or new property taxes.

Through BudgetPlateau.com, the borough invited residents to submit their own balanced budget by modifying services and activities taken from its current budget. The consultation website generated several important and detailed insights for the borough. For instance, the Plateau learned that 72% of respondents are interested in eliminating one waste collection per week and implementing a food waste collection instead. It also learned that its residents are open to increased taxes if the additional revenue is tied to a specific project: when asked if they would accept a new local tax, almost 70% said “no,” but when asked if they would agree to a $50 tax to fund a specific project, such as planting trees or repurposing a church, 68% were in favour of a special project. The respondents of the consultation also showed a preference for adding new activities to the budget: 63.9% were in favour of instituting a budget for public art, with an annual budget of $37,023 suggested on average. 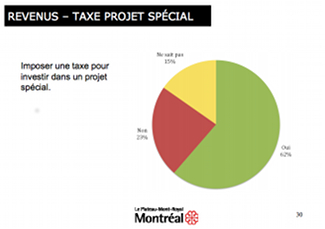 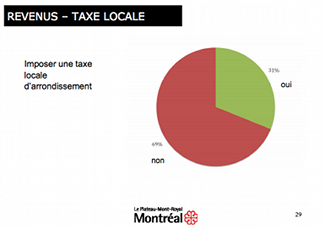 In addition to the 645 budget proposals, the Plateau received 462 comments through Citizen Budget. This direct input allows city officials to clearly document and understand the needs of their residents, and provides citizens with a channel to ensure their voice is heard by representatives. In their budget presentation, the borough announced that they would not institute a local tax and would avoid reducing services to ensure that they pay attention to the priorities expressed by residents. The Plateau will be presenting its 2013 budget to city council on November 13th to confirm this citizen-oriented plan. 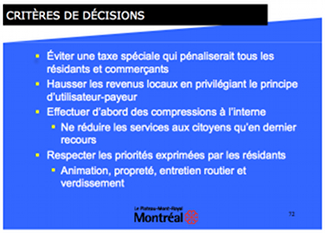 We look forward to working with the Plateau again next year to engage even more residents on their local government’s budget. If you’re interested in having Citizen Budget in your own borough, municipality or province, use Represent to find your local officials and ask them for it!