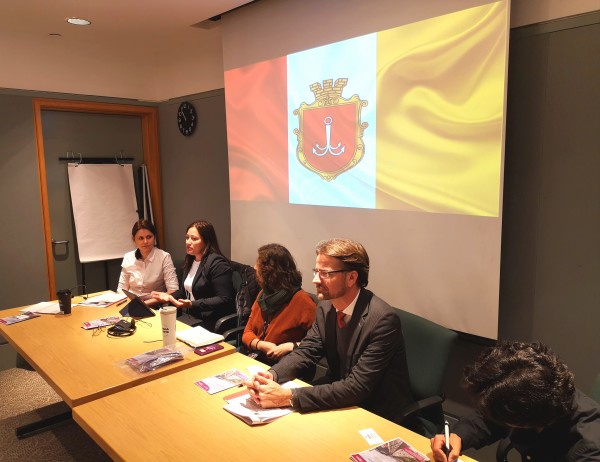 This is the first in a series of “What We Heard” posts from the Applied Research Lab with reflections from the Open Government Partnership Summit 2019.

The Open Government Partnership (OGP) Summit 2019 provided a platform for participants to share their locally-initiated open government projects. Throughout the week we heard from speakers ranging from city officials to activists, and even a family that carried out a project to visualize their country’s budget spending. Clearly, open government can be the business of everyone. And in fact, this was an recurrent theme (and question) that permeated the conference.

As discussions highlighted throughout the week, the OGP community has come a long way in becoming more ‘inclusive’. According to the OGP, as of the end of 2018, only 54 OGP commitments include women or gender, which represents less than 2% of the 3,000 commitments made by national and local governments. However, inclusion in practice means much more than setting broad, national and international targets to include more women and girls in a democratic process.

In this post we present two local OGP experiences coming from the South American context, to highlight local practices which embody different dimensions of inclusion, while outlining areas of work that could benefit from further research in order to improve the impact of OGP on a subnational level. Through these stories, we highlight how inclusion can entail engaging citizens across diverse jurisdictions, connecting with citizens in their familiar settings, and ensuring that marginalized and vulnerable groups have voices in open local government activities.

During the Local Side Event of the OGP Summit week, we heard from Gustavo Ungaro, Comptroller General of São Paulo City Hall and Julia Fernandes de Carvalho, Representative of the Open Government Agents Program (Brazil), who shared their experiences working on open government initiatives in São Paulo, an OGP subnational member. They highlighted the city’s Open Government Agents Program, a program initiated in 2015 to create a network of civil servants working on open government, in order to foster peer-to-peer learning at the neighbourhood level. The city launched a public call for agents, inviting any resident with the desire and skills to teach a particular subject to apply to the call. These agents designed their own courses related to open government, and provided them free of cost to their communities.

The São Paulo experience was inclusive in terms of its reach and setting: the program effectively engaged all of City’s the 32 Municipal Subprefectures (city districts). In a city with over 12 million people, and with significant income inequalities across neighbourhoods, the structure of the program effectively diffused the workshops to every part of the São Paulo. Moreover, the agents made use of community spaces to hold the workshops. By leveraging existing community networks, physical infrastructure, and knowledge, the program invited citizens to learn and engage with open government in their own backyard. In this type of environment, non-experts, coming from every walk of life can feel welcomed to learn.

This program represents a significant departure from the typical hackathon, learning lab or co-creation activity that has been perceived as the gold standard for citizen participation in open government. While these types of activities can be valuable, they may also incentivise self-selection from a subset of well-educated citizens or those with prior-knowledge and expertise in digital government.

Overall, São Paulo’s peer-learning approach had a demonstrable impact. According to a report by the OECD, from November 2015 through to the end of 2016, over 15 000 people attended the workshops. Moreover, over 90% of participants rated their experience as good or great with regard to information availability, quality of the agent’s knowledge and teaching skills, and applicability of the subject (OECD, 2017).

Moving forward, there remain opportunities to investigate the replicability of this type of peer-to-peer learning program, while continuing to research and find ways to monitor and evaluate the impact of the program over time. For instance, did the workshop learnings translate into more active engagement for citizens that took part? Do the government employees that participated actually apply the skills they learned? Working towards answering these questions can get us closer to measuring the long term impact of local, and inclusive open government initiatives.

The municipality of Renca (part of the Santiago Metropolitan Region), has been working with the Tribu foundation, along with other local actors, to develop the city’s first Communal Open Local Action Plan; the first of its kind in Chile. The process involved inviting neighbours to gather, to learn about open government, and to work on defining their local ambitions for more transparent, participatory municipal government (El Mostrador, 2019).

During a session on inclusion at the OGP Summit Local Side Event, Tribu foundation director Tomás González Olavarría highlighted that the development of local plans and working at a community level are themselves an important measure of inclusion, especially in countries that face high levels of inequality and segregation. Therefore, their approach was not only mindful to the socio-economic factors that serve as barriers to public participation, but also they also took special care to include citizens of different identities, abilities, and experiences. For instance, while the project leaders initially wanted to make use of online platforms, they quickly recognized that not everyone in the community was digitally connected. The focus accordingly shifted from online engagement to holding in-person workshops. These workshops prioritized the inclusion of women, youth, immigrants, indigenous people, people with disabilities, among other groups, by directly reaching out to these communities and inviting them to join the sessions.

As Renca continues its work to translate the plan into action, their participatory process highlights some key questions for further consideration. Namely, how do self-selection biases in these types of open government events affect not only who shows up, but also what takes place during the activities, and the eventual outcomes? For instance, throughout the OGP summit week, a number of civil society representatives expressed that in their localities, while women are often the driving force behind organizing and community work in their neighbourhoods, they may still be hesitant to speak up, and to assert their positions and needs in these settings.

Getting citizens to actually show up, is only the beginning of the work: it is equally important to monitor who is actually steering the conversations, while recognizing that it requires a certain set of abilities for an individual to voice their opinions in front of a room full of people – where cultural differences, education, power, privilege, timing and trust can all come into play. A greater depth of understanding into these dimensions, and in particular, how they introduce bias (or not) into outputs and actions would help OGP local initiatives foster more meaningful inclusion throughout the entirety of the participation process, particularly for in-person activities.

Throughout the OGP Summit week, we learned of many different avenues for local open government action, where practically speaking, inclusion can mean reaching citizens across vast and diverse territories, meeting citizens in their own setting, and involving residents which have been traditionally under-represented in these discussions. To further the impact of OGP on a local level, we need to continue to not only invite our communities to the deliberation table, but also improve our understanding of how local learning and co-creation activities translates into action and long-term impact for citizens and government, while taking into account and adjusting for the factors that shape who has a voice (literally speaking) in local democracy.