Je Veux Savoir, the end of a great journey

In 2013, we had the chance to get financial support from the Minister responsible for Democratic Institutions and Citizen Participation, Bernard Drainville, to develop a portal for requests to access to documents, thereafter named Je Veux Savoir.

The platform was launched as a pilot for 6 months in the fall of 2013. During this period, the platform allowed to submit access to information requests from 5 departments involved in the process. The aim was twofold: to hone the platform used (Alaveteli) and work with the concerned departments to integrate this type of tool. The whole approach was based on What Do They Know, a very successful initiative led by mySociety in the United Kingdom.

Any request made through the Je Veux Savoir web interface resulted in a request made by email to the department. Both the initial request and the subsequent exchanges (including, possibly, the final answer) was publicly displayed on the platform. 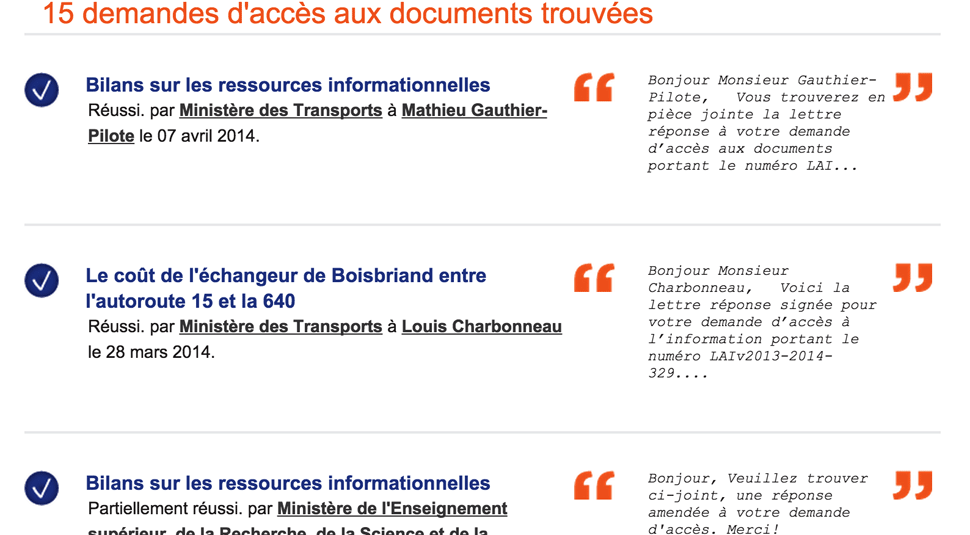 This was not without challenge for the concerned public agencies. While all have an email address and that, in theory, the law allows email inquiries, the departments did not really have processes to address these requests and often asked for personal information, such as a postal address (information that we did not want to be published and that were not required under the law). Moreover, some officials of access to documents of participating departments had a negative view of the fact that all exchanges were public.

Once these difficulties were solved, the portal allowed to forward 31 requests, including 15 that have enabled access to the requested documents, such as the assessment of information resources of departments and the use of discretionary budgets of departments. The number of demands was below expectations. The restriction to 5 departments (while nearly 2,000 organizations are subject to the Act respecting Access to documents) resulted in many potential applicants being unable to use the tool.

Development hoped… but not realized

After the pilot project, the Ministère du conseil exécutif (MCE) was supposed to conduct an evaluation of the tool and of the resulting request, and then suggest a path for the future. Unfortunately, from what we know, this evaluation never occurred. For several months, Open North played with the idea of importing in Je Veux Savoir the 2,000 organizations listed by the Commission d’accès à l’information, regardless of the outcome of the evaluation of the MCE. However, the human and financial resources required to maintain the platform came into competition with the other projects Open North realizes without income (Represent, the development of Popolo, and the participation to the Open Government Partnership’s Open Data Working Group).

Given the risk of stretching excessively our resources and the difficulty to obtain financing or operational support, we decided to put an end to Je Veux Savoir, effective June 30, 2015.

While it was not an easy decision to make (and one that was long postponed), it seemed best to simply put an end to the project rather than leaving it without any real support or supervision. We continue to believe that Je Veux Savoir is a powerful and necessary tool: despite repeated promises to review access to information, from an external point of view, things do not seem to have progressed in the last two years. Furthermore, Québec continues to fall behind on the subject while a significant number of citizens fail to know their rights in terms of access to information or let themselves be put off by a process that seems more complicated than it really is. In addition to making requests of access to information easier to implement and to follow, Je Veux Savoir allowed information to be opened and allowed the documentation of refusals from government agencies. Finally, Je Veux Savoir implicitly aimed to increase the use of digital technology in public services - since access to information lags behind on these aspects.

These difficulties also highlight the recurrent problem met by such ‘civic tech’ initiatives: who should pay? The initial approach, having obtained public funding and the collaboration of concerned public organizations, was exceptional compared to other similar initiatives. However, what ideal development should have taken up this type of initiative? Was the adoption of the tool by the government as an official service desirable? Or should this type of tool remain in the hands of civil society in the form of philanthropic support or subsidy? Nevertheless, we remain attentive to any idea of proposal to revive a similar service.