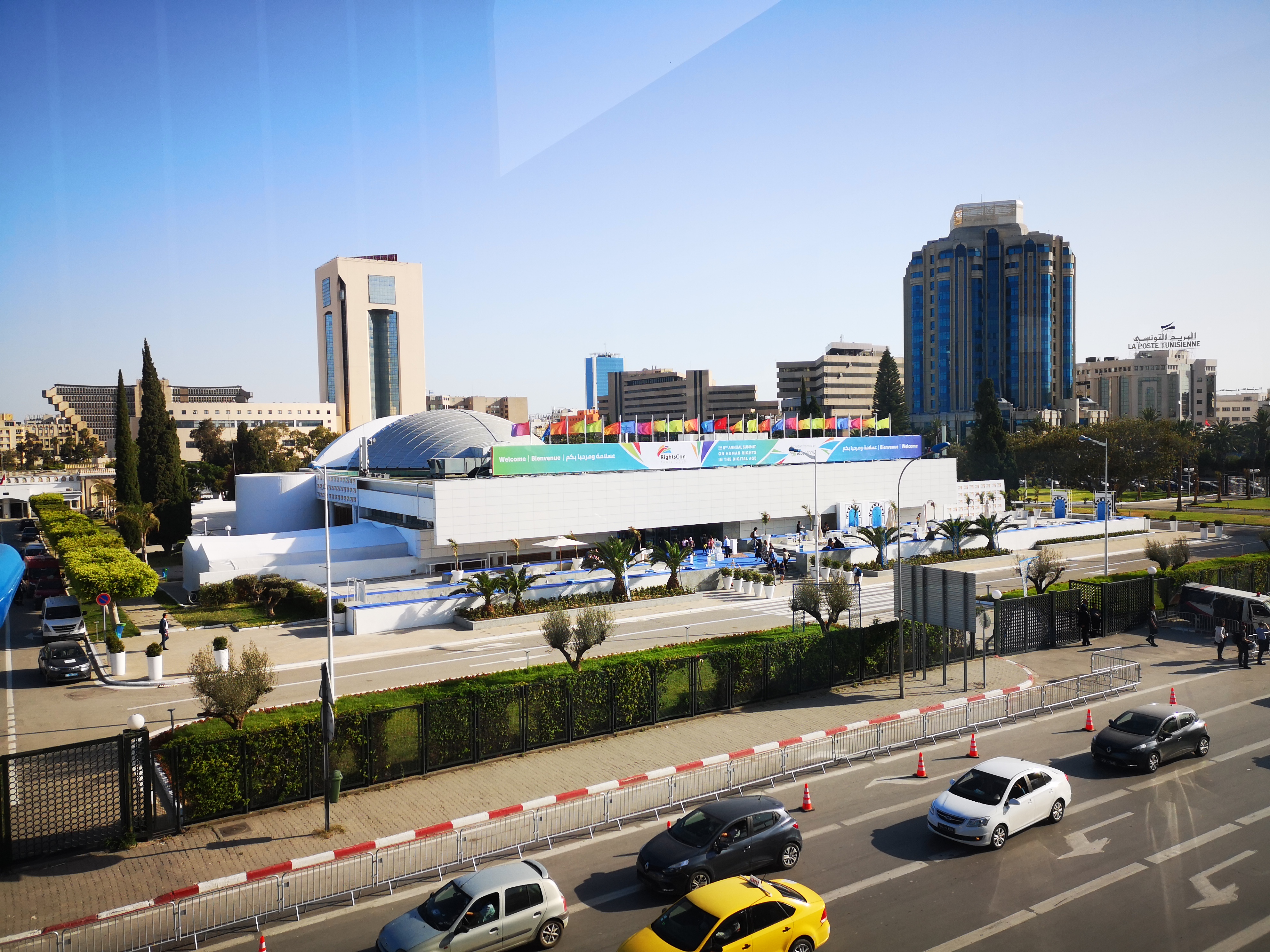 RightsCon is an annual meeting of human rights activists, civil society representatives, government officials, researchers, academics and individuals from the tech and private sector. This year RightsCon was held in Tunis, Tunisia, both a timely and appropriate setting, given that the civil society uprising which took its roots in Tunis in 2011 has paved the way for the country’s democratization, while also inspiring other countries in the region to initiate their own revolutions. These protests and uprisings, collectively referred to as the Arab Spring, were marked by the significant use of social media to mobilise citizen demonstrations.

Spending time in this historic city, while also learning from the efforts of activists around the world in their pursuit of human and digital rights (such as freedom of speech and the right to privacy and security in the digital age), gave me a strong appreciation for many of the rights that I tend to take for granted, as a resident of Canada, a wealthy and democratic country.

This week also served as a reminder of how powerful actors can frame, influence, or manipulate concepts and ideas, in order to advance their own agendas. This theme came up throughout many of the conference talks, from discussions on the proliferation of online violent extremism content in the recent Indian elections to sessions on abuses of government power which are made possible by the control of civic spaces online.

During my time at RightsCon, I was particularly interested in understanding the use of the term ‘smart city’. OpenNorth has studied this concept carefully in the Canadian context, through it’s collaborative research project which resulted in the creation of the Open Smart Cities Guide. OpenNorth is also connected to local work as a partner organization of the International Observatory on the Societal Impacts of Artificial Intelligence and Digital Technologies (supported by the Government of Quebec), as part of our work to move forward critical thinking on the use of technology in cities.

With this in mind, I want to explore how the term ‘smart city’ has spread and how it’s being used in settings outside of Canada. It was clear that attendees had varying interpretations of ‘what is a smart city’, as their respective understandings often related to their own experiences of the introduction of digital and networked technologies in their communities. Many of these experiences likened the term ‘smart city’ to the introduction of digital technologies (namely cameras, sensors, facial recognition technology) to public spaces, which may create the conditions for digital, real-time and all-encompassing state surveillance with commensurate government control.

‘Smart’ technology experiences from cities in the Global South

During the session “Smart” Cities in the Global South: Should “smart” people trust them? (facilitated by Juliana Novaes Head of Projects, Youth Observatory) participants heard from a number of experts’ experiences with ‘smart’ technology in their cities. Some of these stories I share below, beginning with the city of São Paulo, Brazil.

São Paulo has recently integrated facial recognition technology and interactive platforms into one of its metro lines. According to an article by CityLab, these platforms can recognize the expressions of users’ faces as they view advertisements, and then categorizes them into four moods: happy, unsatisfied, surprised, or neutral. Moreover, legal expert Caio César de Oliveira (Lawyer, Pinheiro Neto Advogados), who spoke during the session, explained that the facial recognition system is also being used to detect if passengers are using the metro card that was assigned to them. By identifying those who are using metro cards with cheaper fare, the system can deny entry to passengers on the spot. At the outset, this can seem like a good idea, as an efficient way for the transit providers to protect their revenue source. However, on top of concerns relating to the accuracy of artificial recognition technology, this system could also potentially lead to the criminalization of certain citizens, by making it easy for police to identify and charge fare evaders for a fairly harmless wrongdoing.

Next, Sigi Waigumo Mwanzia (Digital Policy Fellow, Article 19 Eastern Africa) spoke about the Kenyan context. Mwanzia expressed her concerns relating to the country’s digital identification system, as the government intends to collect biometric information and store it in a master database containing personal information on all citizens. She said the proposed system is being rolled out very quickly, which gives the courts little time to ask questions regarding the protection of citizen’s data. Kenya’s major cities are also using surveillance technology : both Nairobi and Mombasa now use a surveillance system consisting of CCTV cameras which connect directly to local police stations. Overall, Mwanzia’s comments reminded me, that the rate at which our governments can procure and adopt technology is not necessarily the same rate at which we (citizens) can inspect, deliberate, question, test, research, and provide feedback to government.

Finally, the session You’re not Just a Pretty Face: Biometric surveillance has moved beyond facial recognition - how do we stop it? (facilitated by Jennifer Lynch, Surveillance Litigation Director, Electronic Frontier Foundation) invited contributions from participants, one of whom spoke of the situation of surveillance in some Chinese cities in the region of Xinjiang. The use of multi-source data collection (biometric identification, IP addresses, facial recognition) enables a state of surveillance, and gives the government the ability to track citizen activities across systems. According to an article published by the New York Times, the government is using these algorithmic technology systems for racial profiling, to identify and track the muslim minority population.

The above examples, coming from cities in the Global South, not only raise a wealth of concerns relating to the right to privacy, data protection, and fair treatment in the name of the law, but they also provide insight into how governments are justifying the use of surveillance technology in cities. Public authorities claim that these technologies will improve the safety of citizens by allowing police forces to identify and mitigate security threats. They may also justify the purchase and use of these systems as a matter of convenience: to make the lives of both security forces and citizens easier, and more efficient. In these experiences of ‘smart cities’ citizens are obliged to effectively trade their right to privacy, for the promise of better safety and security.

And what about ‘smart cities’ in the Global North?

Cities of the Global North are not immune to these concerns or problems relating to citizen privacy and a surveillance state (one only needs to look to Sidewalk Labs proposal for the Quayside development in Toronto and the surrounding controversy), but the topic of smart cities has been so far approached and examined with skepticism, from a considerable body of academic, policy and civil society circles. This collective response, which is supported by existing legal and regulatory frameworks and democractic processes, has enabled and pushed forward critical thinking on ‘smart cities’ for a wide realm of stakeholders, including government. The result is that the discourse around ‘smart cities’ in this context has landed in the realm of very cautious optimism.

In Canada, OpenNorth lead a collaborative research project in 2018, the first of its kind to investigate smart cities practices in Canadian cities and internationally. In our Open Smart Cities Guide, we suggest that cities may explore the possibility of mobilizing data and technologies “when warranted in an ethical, accountable and transparent way to govern the city as a fair, viable and liveable commons”.

In the European context, smart cities initiatives are accompanied by the strengthening of legal frameworks, such as the General Data Protection Regulation (GDPR) a regulation that came into effect in 2018, intended to protect the data and the privacy of all individual citizens of the EU. At the same time, a number of European cities, such as Barcelona and Amsterdam, are approaching the issue of data collection in cities through a human rights-based lens, through initiatives such as Cities for Digital Rights which claims “ […] we are committed to eliminating impediments to harnessing technological opportunities that improve the lives of our constituents.”

In the US, the city of San Francisco is the first in the country which has banned the use of facial recognition technology. Still, according to an article by the New York Times, some critics are arguing that “rather than focusing on bans, the city should find ways to craft regulations that acknowledge the usefulness of face recognition”.

It these cases, it seems that while there are serious concerns related to the use of networked technology in cities, there continues to be some remaining belief, or hope that technology can be used for good. That it’s potential public value for city dwellers should be denied completely. However, the preconditions to truly realize this public value of technology in cities are many, beginning with laws to protect citizen data, then building and implementing appropriate ethics and accountability frameworks, all of which should be guided by meaningful participation from citizens and a range of stakeholders. In any context – whether it be in cities located in the Global North or the Global South – this is no small feat.

At RightsCon 2019, discussions on ‘smart cities’ showed how this concept can be used as an excuse for potentially all-encompassing state surveillance in cities, to move forward an agenda of government control. These cases need to be studied in depth in order to continue to bring attention to the abuse of power that are occurring under the name of ‘smart cities’. This can begin by inquiring into the technology itself, and then delving into its potential risks, harms and implications at an individual and societal level.

Luckily, I got to meet an incredible body of researchers and activists at RightsCon who are doing this work, tirelessly questioning and exposing the intentions behind surveillance technology procurement in corrupt and authoritarian governments, raising awareness on issues surrounding consent and data privacy, as sensors and cameras increasingly find their way into the built environment, all while fostering data literacy and grass-roots movements in their respective communities. They continue to prove that while concepts and discourse is important to understand, in the end it’s the action that actually matters.

As a final note, I’d like to extend my gratitude to LOJIQ, for supporting my participation in RightsCon 2019. I’d also like to welcome fellow RightsCon participants and readers to check out the work of OpenNorth’s Applied Research Lab team, as we look forward to continuing these discussions at the intersection of data, government, cities and society.