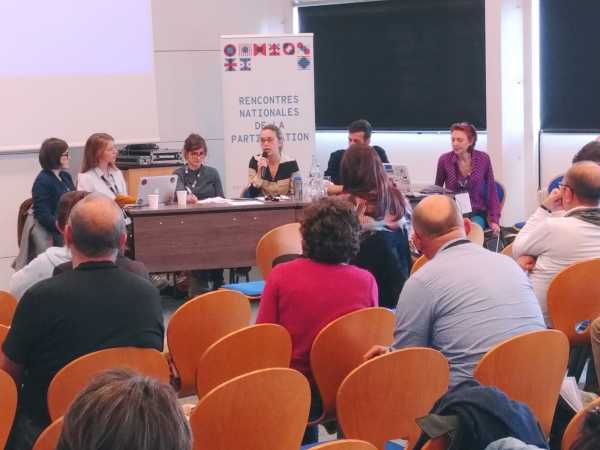 Discussions on data for public participation: datascience and opendata for good

OpenNorth was invited to participate in a panel discussion entitled “Discussions on data for public participation: datascience and opendata for good”. The debate invited speakers to share their experiences with different forms of production, analysis and visualization of data for the purpose of engaging citizens. Overall, the talk revealed ways in which data can be channeled to sustain active and engaged public participation.

To open the debate, OpenNorth drew upon examples from the City of Montreal’s open data program, to demonstrate the ways in which open data can be a part of city citizen involvement strategies, by encouraging citizens to leverage open data for initiatives and projects in the public interest. First, open data which is made accessible and understandable to a wide audience, allows for citizens to be better informed on municipal decision-making. From this opening of data, cities can work in partnership with local actors to create digital tools that respond to the needs expressed by the local population. Secondly, by gathering actors to share data across different sectors, data can feed into collaborative problem solving strategies, as an approach to solving local and urban issues.

At the end of the talks, the audience enriched the debate by sharing some concerns, including the difficulty of accessing open data for non-experts. In many cases, open data access is restricted to those with advanced technical skills. In this respect, OpenNorth’s approach is centered on data literacy, as we work to equip public authorities to build a culture of data use which makes open data accessible to non-specialists.

The audience also made observations at the intersection of smart cities and sustainable development. One audience member asked: as we observe the increase of sensors and technologies in our urban environments (which implies considerable energy consumption) is the idea of a smart city in contradiction with that of the ecological transition ? These questions invited us to reflect on the ways in which cities and their stakeholders can take into account the costs of the complete life cycle of information technologies in city building projects. It is also important to recognize that data and technology are not always the appropriate solution to multiple, urban, systemic problems – cities and communities should use data and technologies that are fit for purpose and tailored to their needs (for more details on this topic, see OpenNorth’s Open Smart Cities Guide v1.0 starting on p.17).

On the whole, the conference invited participants to discover initiatives led by French municipalities, which have seen real success in involving their citizens in the development of their territories and environments. Based on a strong tradition of citizen involvement, many communities across the country are experimenting with citizenship, looking to renew the role of citizens as co-producers and co-managers of their communities.

For instance during field visits to La Péniche, a cooperative organization based in Grenoble, OpenNorth learned from a group citizens who created a digital tool to make French territorial statistics easier to digest and understand. This online tool was built using open data. Equally inspiring was the participatory budget of the City of Grenoble, an initiative of the City which invites residents, collectives and associations to propose projects that contribute to the the transformation of the city.

In the spirit of these meetings, OpenNorth intends to support continued exchanges with our partners in France and Canada, with the goal of improving the state of citizen participation and local democracy. By sharing our experiences and expertise locally and internationally, we aim to support a knowledge-sharing ecosystem, to advance participatory and open governance practices for citizens in Canada and around the world.

Lastly, we would like to thank the Offices jeunesse internationaux du Québec (LOGIQ) for supporting OpenNorth’s participation in this event, as well as Décider ensemble which organized these inspiring and enriching exchanges.