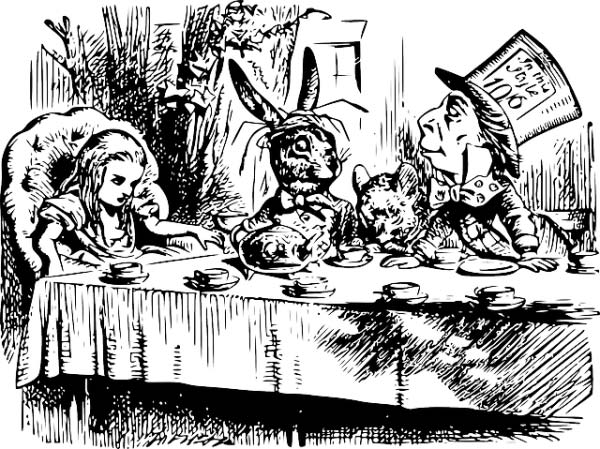 In this ongoing series of posts, I discuss questions and observations that have risen after going down the “Open Data rabbit hole”. In a previous blog-post, I discussed some of the challenges that I perceive the open data field is facing. However, after a year of chasing this metaphorical white rabbit — lo and behold — I find myself deeper into Open Data Wonderland, facing new and interesting characters.

I have found that the work we do in open data is intrinsically tied to other trends in open, transparent government. As such, open data expertise needs to be put at the service of other complementary initiatives. Fiscal transparency and open contracting, for example, entail making relevant anti-corruption datasets open and discoverable to the public. Interoperability, discoverability and data poverty are open data issues that apply to these new data sets.

Particularly in Latin America (where I’m originally from), scandalized citizens are trying to find ways to keep their governments more accountable, responsive, and transparent after revelations by Marcelo Oberdrech exposed alarming levels of state corruption and graft. Heir to the largest Latin American construction company, the former CEO of Oberdrech Construction provided prosecutors with evidence of state bribery reaching the highest echelons of power. To date, Oberdrech’s revelations have claimed the political lives of two presidents, one vice-president, several ministers, and other political heavyweights across the region. Regional leaders at the Summit of the Americas, held in Lima in April, made a point on the importance of Open Government and Open Data as a way of fighting corruption. In the aptly named “Lima Commitment on Democratic Governance Against Corruption”, section 14, for example, outlines high level commitments on implementation of national policies and plans, in the areas of open government, digital government, open data, fiscal transparency, open budgeting, digital procurement systems, public contracting and a public registry of state suppliers. Another interesting commitment out of the Lima Summit is on promoting the establishment of an Inter-American Open Data Program within the OAS.

The upward momentum on fighting corruption in the region cannot be understated. The Lima Summit was held under the shadow of President Pedro Pablo Kuczynski’s resignation after Oberdrech pointed the finger at the embattled peruvian leader.

Beyond Latin America, two of the main themes of the Open Government Partnership agenda for their next summit in Tiblisi, Georgia, will largely focus on anti-corruption and inclusive government. In Canada, specific initiatives on fiscal transparency and open contracting could be added to the OGP Action Plan for the next 2 years.

Although the idea of “Participatory Budgeting”, which first emerged as a grassroots movement that engaged citizens in local policy decision making in Brazil, has been around since the late 80s, the open data and civic-technology movements have stayed largely clear of budgetary policy-making.

At OpenNorth, we have been working with over 100 municipalities in Canada, the US, France and others, to implement our online budgetary tool, CitizenBudget. Recently, and after 5 years of implementation, we undertook research to see the effect of Inclusive budgeting in the local polity. Our research potentially shows how online and inclusive budgeting advances shared goals in open government and fiscal transparency. As such, we need more connections between those engaging on inclusionary government budgeting and those advocating for more transparent open government.

A first step forward is inviting and reaching out to those engaging in budgetary engagement to community of practice spaces in Civic-tech and Open Government. I recently presented ongoing research on the impact of inclusive online budgeting at MySociety’s TICTec in Lisbon, the largest civic-technology conference in the world, for example. Our Executive Director, Jean-Noé Landry, recently pitched our CitizenBudget tool at the Vivatechnology festival in France where he found that there was much interest for gov tech solutions to enable municipal governments to engage citizens and promote open data literacy. By accessing these spaces, we are furthering our understanding of the linkages between open data, inclusive budgeting and fiscal transparency for fighting corruption and making government more transparent.

We cannot, and should not, compartmentalize open government, open data, civic technology, inclusive budget policy-making and fiscal transparency into separate boxes. In spite of what sometimes feels like a crazed (Mad) Hatter tea-party, all these interrelated areas of work have their proper and rightful place at the table.

As always, keep your eyes peeled for future installments of Christian’s Adventures in Open Data Wonderland.

Views presented here are reflective of the author’s own experiences and ideas and are not necessarily reflective of OpenNorth’s official organizational stances.

About the author: Christian is a researcher and practitioner in the Open Data and Open Government fields at OpenNorth. He finds great potential and is passionate about the opportunities this brings to improving the quality of democratic institutions in Canada and abroad. His academic background is in conflict, post-conflict reconstruction and international development. Canadian via Colombia, Christian hopes to bring a Global South and minority perspective to the Civic-Technology space.